GOLDILOCKS AND THE THREE BEARS at the MAYFLOWER 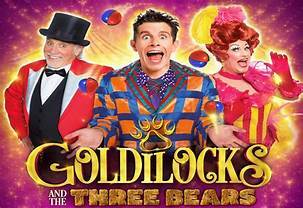 At Southampton’s Mayflower Theatre, actor, singer and television star Jason Donovan will lead the cast in this year’s magical pantomime, alongside Coronation Street and musical theatre star Faye Brookes, with the triumphant return of Richard Cadell & Sooty in Goldilocks and the Three Bears.

With sets and costumes from The London Palladium, Goldilocks and the Three Bears follows Dame Betty Barnum and her daughter Goldilocks, who are battling to save their circus from the Evil Ringmaster who is intent on stealing their three loveable bears and leaving them in ruin.

Jason Donovan plays the Evil Ringmaster following his successful panto season at Birmingham Hippodrome, with Faye Brookes playing the title role of Goldilocks. Sooty will play himself with Richard Cadell as his best friend Joey the circus clown.