A DAY in the COTSWOLDS 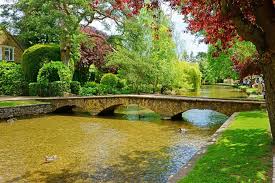 A superb semi-circular route is centred in a designated Area of Outstanding Natural Beauty. Our full day tour not only features places of interest but ample refreshment stops throughout. We take in Burford with its famous High Street that sweeps downhill towards the River Windrush, its three-arched medieval bridge and its impressive church, both sides of the street flanked by an unbroken line of ancient houses and shops. Our tour includes visits to Chipping Norton which is the highest town in Oxfordshire, situated on the western slopes of a hillside that was once the site of a Norman castle and Moreton-in-Marsh which is one of the principal market towns in the northern Cotswolds situated on the Fosse Way. It grew up in the thirteenth century as a market town with a wide main street, narrow burgage plots and back lanes. Next, it’s Bourton 0n the Water, a charming English village in the heart of the Cotswolds. Regularly voted one of the prettiest villages in England, Bourton-on-the-Water has a unique appeal to visitors and residents alike.

With plenty to see and do, Bourton-on-the-Water offers a wealth of attractions and shops, restaurants and tea rooms, or simply for you to enjoy some tranquil time by the River Windrush with its beautiful bridges throughout. Our final tour highlight is Bibury. Bibury is a charming, typically Cotswold, village once described by William Morris (1834-96) as “the most beautiful village in England”. In fact, Fox News says that Bibury is one of the world’s most picturesque villages, and an article on the Huffington Post website (1st May 2014), titled “The Most Charming Towns In Europe You’ll Want to Visit ASAP”, mentioned Bibury. The Cotswolds is home to some of the most unspoilt, historic and famous towns and villages in England. The honey-coloured stone buildings provide a quintessential English charm found no-where else in the world. It really is a unique experience!