HAMPTON COURT – A FIELD OF CLOTH OF GOLD 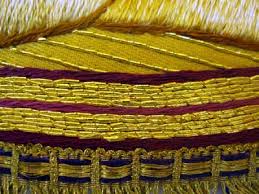 In 2020, a majestic event will arrive at Hampton Court Palace. In June 2020, it will be 500 years since Henry VIII of England and Francis I of France met near Calais for a Grand European Summit. Designed to improve relations between the two kingdoms, the princes enjoyed a fortnight of; feasts, tournaments, masquerades and religious services. So extravagant was the affair that it became known as the “Field of Cloth of Gold”. Gold and Glory: Henry VIII and the French King. To mark this event Historic Royal Palaces will be rolling out the gold carpet with a special exhibition in the rooms of Thomas Wolsey. You’ll be guided through the turbulent relationship between the two nations and the events that resulted in François I requesting a meeting with Henry VIII. On display will be the original letter from François I to Thomas Wolsey, the organiser of the Field of Cloth of Gold. Moving deeper into the intricacies of the meeting, learn of the sheer scale of the occasion, from spending records kept to accounts of activities undertaken such as jousting and mass. All’s fair in Love and War – discover how Henry VIII quickly turned against the new alliance and attacked France just one year later.

Your entry ticket includes all attractions at Hampton Court including Hampton Court Palace’s world-famous gardens include 60 acres of spectacular formal gardens and 750 acres (304 hectares) of parkland, all set within a loop of the River Thames.

Henry VIII’s Kitchens at Hampton Court Palace were the largest of Tudor England. 200 cooks, sergeants, grooms and pages worked to produce over 800 meals a day for the hungry household of Henry VIII. Hampton Court Kitchens was a complex business all done without modern conveniences as 1.3 million logs burned in the hellish fires every year. From boiling cauldrons to roasting spits, join the day-to-day grind of Henry’s cooks as you pass through this labyrinth of kitchen spaces.