A Taste of Yorkshire Railways 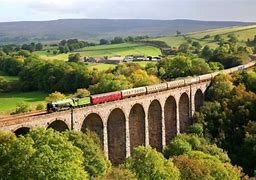 North York Moors Railway • The Keighley & Worth Valley Railway • Settle to Carlisle Railway
A specially designed tour that has ingredients for enthusiasts and likeminded who are keen to enjoy railway travel in and around the heart of Yorkshire. Different railway journeys, all of which offer spectacular scenery such as the Ribblehead viaduct – and the outstanding natural beauty of God’s Own Country.

Saturday: A breakfast time departure then ample comfort stops on the way to the city of York. Like stepping back into the middle ages, the overhanging timber-framed houses and traditional shopfronts of The Shambles makes it one of the UK’s most historic (and picturesque) streets. You can’t miss York Minster, one of the largest cathedrals in Northern Europe and also one of the most beautiful gothic cathedrals in the world.  Spend an afternoon at leisure before continuing to our hotel with time to relax before evening dinner is served.

Sunday: After breakfast we travel to Pickering where we will board the North York Moors Railway. Our return journey to Goathland is on the preserved historic railway stretching for 18 miles through the heart of the North York Moors National Park, from Pickering via Levisham, Newton Dale and Goathland. Goathland, became Hogsmeade Station in the first Harry Potter film and fans of Heartbeat will also recognise the place. Enjoy lunch before the return journey then to our hotel to relax before evening dinner.

Monday: After breakfast we visit Keighley for a return journey on the Keighley and Worth Valley Railway. The Worth Valley branch out of Keighley climbs up the valley serving several small Pennine villages along the way. The railway has become synonymous with the 1970’s film ‘The Railway Children’ starring Dinah Sheridan and Jenny Agutter. However, the railway has featured on-screen for well over 40 years’ It has played host to many television dramas and feature productions. There is a transfer from Howarth Station to the village where you can enjoy lunch and explore the village made famous by the Bronte sisters. We’ll return to Harrogate to offer an afternoon at leisure before evening dinner.

Tuesday: Breakfast then we head to Skipton for a brief visit to the town known best as the Gateway to the Dales. Later, we board the Settle to Carlisle exclusive tourist-centred charter train for the scenic and spectacular journey to Carlisle also featuring the Ribblehead Viaduct. With reclining seats at a private table, on board refreshments and large windows for viewing the counties dramatic scenery, guests will travel in style and comfort. There’s a lunch break in Carlisle before returning to Skipton and on to our hotel in time for evening dinner which concludes the day!

Wednesday: A breakfast farewell to our hosts as we head for a homeward treat at the city of Lincoln. History reigns in Lincoln, where Roman ruins, medieval monuments, and a Norman castle can be found within steps of each other. Even the modern trappings of this city feel nostalgic—cobbled lanes harbour independent boutiques and tea rooms hide behind half-timbered façades. This memorable tour with all its nostalgia ends in the local area during early evening.

The Cairn Hotel, a grand Victorian hotel, is situated on the on the edge of the stunning spa town of Harrogate. The hotel was built during Harrogate’s period as a Spa Town when people came from far and wide to take the waters. Carefully modernised, grand original features will still welcome you to this charming hotel. Located only a short walk from the centre of town, The Cairn Hotel is a perfect base for our itinerary. There are lifts to all floors, a fitness room, and free WiFi. All rooms offer en-suite bathrooms, television, hairdryer and tea and coffee making facilities. The hotel prides itself on its food combining this with a relaxed but attentive service amidst the splendour of a Victorian building. From the beautiful Windsor Restaurant dining room to the grand bar and lounge area, there is plenty to choose from.

All coach travel as listed, a free newspaper on day of departure, porterage, 4 nights 3 course evening dinner with choice, tea/coffee, bed and full English breakfast, return journeys on the Settle to Carlisle line (boarding at Skipton) the Keighley & Worth Valley Railway and the North York Moors Railway, time in Harrogate, York and Lincoln, complimentary on-board hot drinks, a Travel & Information Pack and the services of a Tour Director throughout.

Holiday Insurance is not included but is recommended. Financial Security is guaranteed by the Travallen Travel E.C.D. Trust Account with Barclays Bank PLC RESERVATION HOTLINE – 01252 877103 or 07850 504914