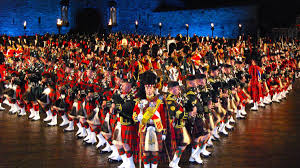 Scotland’s capital city is well deserving of its status as a world-famous tourist destination with attractions to entice visitors all year round. But for 3 weeks in August, Edinburgh plays host to the unforgettable annual spectacle that is the Edinburgh Military Tattoo, performed against the backdrop of Edinburgh Castle.

THURSDAY: With ample comfort stops enroute including an extended stop at Gretna Green, we continue to our base hotel in the city of Perth. Time to relax before evening dinner is served.

FRIDAY: After a full Scottish breakfast – free time to enjoy the city of Perth or join an excursion to Dundee for free time in the city or an option to visit RRS Discovery. (Option cost £12.00 per guest – may be booked day) This award-winning visitor attraction tells the story of the iconic ship ‘Discovery’ from her beginnings in Dundee, her amazing Antarctic expedition with Captain Scott and her voyages thereafter. Through its extensive galleries, video and film shows, interactives and artefacts. We return to our hotel in time for an early evening dinner before departing for Edinburgh in time for refreshments of your choice before taking your seat for the Edinburgh Royal Military Tattoo. Lieutenant Colonel George Malcolm was the first Producer of The Edinburgh Tattoo. He aimed to bring the Army’s contribution to the Edinburgh International Festival to life from a modest event in a park to today’s global showcase at the Castle. On return to our hotel, enjoy complimentary hot chocolate on board before retiring.

SATURDAY: A leisurely breakfast, then we return to Edinburgh to be joined by an official city guide for a panoramic city tour. Later, enjoy the city at will. Edinburgh is Scotland’s compact, hilly capital. It has a medieval Old Town and elegant Georgian New Town with gardens and neoclassical buildings. Looming over the city is Edinburgh Castle, home to Scotland’s crown jewels and the Stone of Destiny, used in the coronation of Scottish rulers. Arthur’s Seat is an imposing peak in Holyrood Park with sweeping views, and Calton Hill is topped with monuments and memorials. You’ll also enjoy the street entertainers of the Edinburgh Festival. We’ll return to our hotel for evening dinner.

SUNDAY: Breakfast, then a scenic drive to enjoy the delights of a popular Pitlochry in the heart of Scotland with real hospitality, clear sparkling air, beautiful scenery, a rich clan history and ample refreshment locations. After lunch of your choice, we continue to Scone Palace which has an exciting and colourful history as one of Scotland’s most important stately homes. Fifteen hundred years ago it was the capital of the Picts. In the intervening centuries, it has been the seat of parliaments and the crowning place of the Kings of Scots, including Macbeth and Robert The Bruce. The Palace houses an outstanding collection of antiques, paintings and rare artefacts and the grounds are renowned throughout the world, making the stately home one of the most popular tourist attractions in both Perth and Scotland. Evening dinner concludes the day.

MONDAY: After a Scottish breakfast we bid farewell to Scotland for our journey south with ample comfort stops to arrive home during late evening.

An ideal tour base, the Salutation Hotel is situated in the heart of the historic City of Perth. One of the most famous patrons to sample its hospitality was Bonnie Prince Charlie who stayed there in 1745, at the height of his struggle to regain the throne for the Stuart Kings. Today, the welcome is as warm as it ever was, offering traditional hospitality with all modern comforts. Bedrooms all have en-suite bathrooms, television, hairdryer, direct dial telephone and tea and coffee making facilities. Utilising local ingredients, the food is something they take pride in. The beautiful Adam dining room, is relaxed and cosy as is Reid’s Bar where you’re sure to find something to tempt your palate.

All coach travel and visits as listed, a free newspaper on day of departure, porterage, 4 nights 3 course evening dinner, tea/coffee, bed and full Scottish breakfast, a visit to Perth with an optional visit to RRS Discovery as described, visits to Pitlochry and entry to Scone Palace, a mid priced ticket to the Royal Edinburgh Military Tattoo, a guided panoramic official guided city tour with free time, complimentary on-board hot drinks, a Travel & Information Pack and the services of a Tour Director throughout.

Holiday Insurance is not included but is recommended. Financial Security is guaranteed by the Travallen Travel E.C.D. Trust Account with Barclays Bank PLC RESERVATION HOTLINE – 01252 877103 or 07850 504914